Noah Gragson was simply doing what the NASCAR system calls for 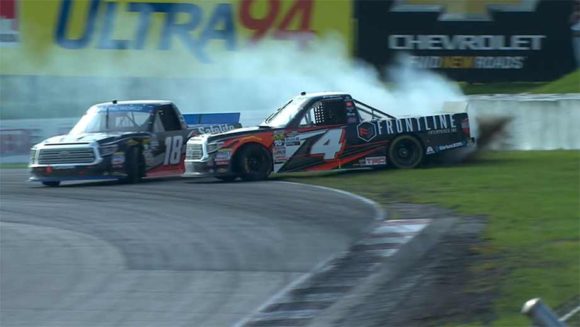 Todd Gilliland(4) and Noah Gragson spin on the last lap(photo from NASCAR.com)

It’s probably safe to say that the folks at Kyle Busch Motorsports didn’t like the ending of Sunday’s Chevrolet Silverado 250 NASCAR Camping World Truck Series race at Canadian Tire Motorsports Park. Within the space of about 200 yards that organization went from the possibility of one of their drivers earning his first career win or one of their drivers locking himself into the next round of the playoffs. Instead, they ended up with two of their trucks spinning within sight of the finish line only to be passed by numerous competitors before limping to the checkered flag.

Despite some close calls, particularly in a recent race at Bristol Motor Speedway, Todd Gilliland has never won a CWTS race. However, he looked to be on his way on Sunday as he led laps 54-64 of the 65-lap event. But as the trucks raced through the road course’s final turn and onto the straightaway leading to the checkered flag Noah Gragson muscled his way into the side of Gilliland’s No. 4 machine sending both KBM Toyotas for a spin. That allowed Justin Haley to slip by and collect the win along with the guarantee of advancement into the next round of the playoffs.

Gragson wound up with a ninth place finish while Gilliland scored a disappointing 11th place result.

Predictably, Gilliland was upset with Gragson over the way the final lap of the race played out.

“Yes,” Gilliland answered when asked by FS1 reporter Alan Cavanna if he had anticipated the contact from Gragson. “I should have never let him get to me. I should have just given him the inside and maybe let him wreck himself, I don’t know. He’s done that to me on like five or six road courses. It sucks, we had the fastest truck and we didn’t win again. I’m going to have to talk to him, for sure.”

Cavanna then asked how he would address the matter with his teammate.

“I’d go fight him right now, but I can’t,” Gilliland responded. “I just need to get my emotions in check and go talk to him. But I’m extremely mad.”

Sunday’s race was the first that makes up the CWTS playoffs that will ultimately come down to a one-race shootout between the four drivers who qualify to race for the title at Homestead-Miami Speedway on November 16th. Gragson and his No. 18 team are in the playoffs by virtue of a win earlier in the season at the Kansas Speedway. Gilliland was not one of the drivers to make the playoffs.

The NASCAR playoff format is structured to encourage drivers to win races in order to advance to the next round. Any driver who is still alive in the playoff who wins a race advances to the next round no matter what finishes he achieves in the other playoff events during that round.

Had Gragson completed the pass on Gilliland and won the race on Sunday, it would not matter what he does in Las Vegas or Talladega. Obviously, that was foremost on his mind as he and Gilliland contested the final lap at Canadian Tire Motorsports Park.

Gragson was simply doing what the playoff system called for him to do. The system was set up to give fans, television networks, and other stake holders in the sport what they want, drivers going all out to win races.

Some may view Gragson’s move as dirty driving and others may see it as simply a racing deal. In reality, it’s just a product of the current system as the young driver was doing what the format calls for.

“That’s just handled later,” Gragson told Cavanna when asked how he would address the situation with his teammate. “Right now it’s all about getting back and regrouping and focusing on Vegas. I wasn’t trying to take him out. I was just expecting him to give me a little bit more room there on the bottom and it just wasn’t there, it wasn’t meant to be.