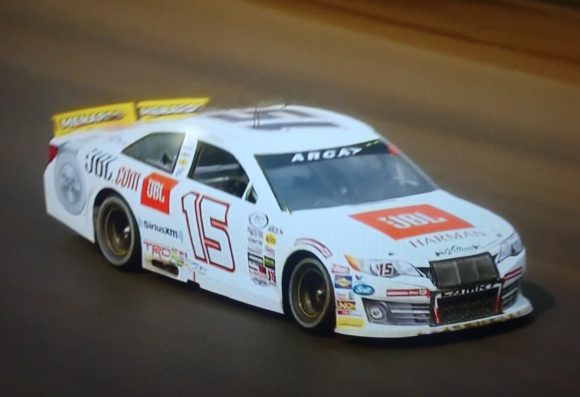 The ARCA Racing Series took to the track on Sunday afternoon to contest one of its two annual events held on dirt ovals with the running of the Allen Crowe 100 at the Illinois State Fairgrounds in Springfield, Illinois. At the end of the day when the competitors packed up to leave the ‘Land of Lincoln’ it was 17-year-old rising star and dirt racing novice Christian Eckes who, along with his Venturini Motorsports team, came away with the checkered flag and the winner’s trophy.

Gus Dean started the race from the pole position after turning the fastest lap in qualifying by touring the one-mile clay oval in a time of 33.836 seconds. Zane Smith, Chase Purdy, Logan Seavey and ARCA Series points leader Sheldon Creed rounded out the top-5 on the starting grid.

When the green flag waved over the 100-lap affair it was Smith who went to the early lead followed by Seavey, Dean, Purdy and Creed. After five laps the top-3 of Smith, Seavey and Creed separated themselves from the pack as the field settled in during the early going.

Just after lap 10 the front runners began to mix it up as Smith slipped out of the groove, giving up the race lead to Seavey. However, the young California driver’s time at the front would be very short lived as Creed nudged the No. 20 machine out of the preferred racing line to assume the top spot on the leader board. Purdy also followed suit and charged to the runner-up position as he took advantage of Seavey’s slip.

Lap 25 proved to be pivotal as the second running Purdy had his car erupt in smoke and flames which sent him spinning into the turn one fence. ARCA teams took advantage of the caution flag to hit pit road which mixed up the running order.

Eckes used a two tire stop to take the lead when the race restarted on lap 35 ahead of Dean, Creed, Riley Herbst and Ryan Unzicker. However, Creed didn’t waste much time as he bolted around Dean to take second shortly after the green flag reappeared. At the same time, Dirt Late Model regular Unzicker began to move toward the front when took fourth away from Herbst.

Lap 45 saw early race leader and ARCA second place points runner Smith come to pit road with overheating issues after a slip out of the racing groove and into the loose dirt on the outside lane of the speedway.

Creed regained the lead when Eckes pitted under caution just before the field restarted on lap 52 while Herbst grabbed second away from Dean when the green flag waved. Unzicker and Travis Braden rounded out the top-5 as the event headed into its second half.

The yellow flag waved again on lap 59 when Bryan Dauzat spun. The running order was once more impacted by pit stops when the lead machine of Creed hit pit road for new tires along several other competitors.
The championship standings were affected in the midst of the lap 59 caution period when Smith retired from the event with continual overheating troubles on his engine.

Eckes cycled back to the race lead with Braden then second ahead of Seavey, Kelly Kovski and Joe Cooksey. Creed would restart the race from the sixth position in a car shod with fresh rubber.

On the ensuing restart, Seavey immediately elbowed his way around Braden and into the second spot with the hard charging Creed following through to grab third. In the meantime, Eckes began to slip away from his pursurers as he built a lead of 1.5 seconds with 30 laps remaining.

But Creed, who has significant dirt racing experience, quickly began to cut into the lead previously enjoyed by Eckes as he closed to the rear bumper of the No. 15 Toyota. But a lap 76 caution for another spin by Dauzat cooled the action briefly.

Eckes beat Creed into turn one on the lap 81 restart as those two drivers raced just ahead of a tight battle between Seavey, Braden and Herbst within the top-5. That contest ended with a spin by Herbst when his No. 18 drifted out of the racing groove before even one lap was completed following the restart.

Eckes again beat Creed to the first turn on the lap 87 restart and that opened the door for Seavey to move Creed up the track to take second while Unzicker moved into the fourth spot.

Eckes looked to have the race under control with ten laps remaining as he pulled away slightly from Seavey and Creed and it looked like those three would settle the issue among themselves. However, a late caution for a multi-car spin would send the race into overtime.

On the event’s final restart, Eckes maintained the lead with Creed muscling his way around Seavey to assume second place. But over the final two circuits it was Eckes who would control the pace until he drove under the checkered flag in front of the packed covered grandstand.